Drawings are now substituted by computers because of the advent of CAD, which guarantees a greater level of accuracy and demonstration. One of the key benefits of CAD is that craftsmen may preserve their work for later use in addition to making changes to it.

Prior to the invention of computers, mechanical, architectural, and civil designs were created manually on sheets of paper or blueprints that contained all pertinent details about particular projects. However, with CAD, such blueprints or drawings can be created with a higher standard of precision and presentation. This has increased the demand for CAD conversion services. They convert hard copy papers into electronic format which makes copying, editing, archiving, retrieving and sharing of the drawings easy. CAD conversion offers several other benefits such as better quality of drawing, improved drawing management efficiency, and also saves space.

Save the drawing using the AutoCAD R12/LT2 DXF option if you intend to use it with files created with AutoCAD Release 12 or AutoCAD LT Release 2.

If you want to save a drawing that was made in an earlier release in its original format, either make the file read-only or open it in the current version and use the File Type choices in the Save As dialogue box. Make sure to give the drawing a distinct name to prevent overwriting it because storing a drawing in a format from an earlier edition could result in some data loss. If you accidentally overwrite the current drawing, you can recover the original filename.bak backup that was made when you saved the drawing.

Steps to Save an AutoCAD Drawing in a Previous File Format

Files in a newer format of AutoCAD may not open in older versions of AutoCAD and you may receive an error message such as the following.

The drawing file could not be opened because it was created with a more recent version of AutoCAD. 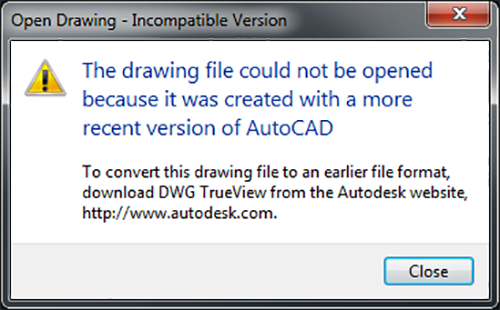 You can save the AutoCAD drawing to an older file format so that it is compatible with earlier versions of the software.

If you can open the file with incompatible message,

If you cannot open the file with incompatible message, you can use AutoCAD’s DWGCONVERT command for batch-converting files to older formats. Another option is to download and install the latest version of file viewing software that may be available for free. In this software also, you can use the DWG Convert feature to convert the drawing.

When saved to a prior release and then accessed again in the current release, associative dimensions created in AutoCAD 2002 or later, typically keep their associativity. In case you modify dimensioned objects using an earlier release and new objects are formed in the process, the dimension associations change when the drawing is loaded into the current version of the software. For instance, if an already dimensioned line is cut so that the interior of the line is eliminated, two-line objects are created, but only one of the line objects is affected by the associated dimension. When a drawing is saved as an AutoCAD R12/LT 2 DXF file and subsequently opened in the most recent version, dimension associativity is lost.

AutoCAD’s Trace command can be used to add changes to a drawing without altering the existing drawing. You can create “traces” in the drawing and share it with collaborators who can view the trace and its contents. Traces are not supported in the DXF format. Also, Traces are supported only by drawing file formats 2010 or later.

Save Drawings with Big Objects

Objects bigger than 256MB cannot be used in drawings saved in a legacy drawing file format (AutoCAD 2007 or AutoCAD LT 2007 or earlier).

All this information and steps to save an AutoCAD drawing into an older or previous file format is useful to know if you are sending the drawings to someone who is using a different version of AutoCAD. If your team is working on different versions, then the option to change the default file format will make life a lot easier. You can reach out to reliable CAD conversion services to convert and save any drawings.